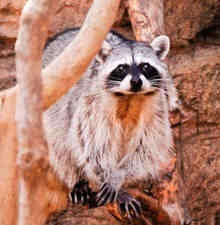 Raccoons are intelligent, curious, and endearing creatures that find ways to be disruptive of their human neighbors. Raccoons that find food sources provided by humans lose their fear of people and sometimes move right in, and when raccoons establish themselves on human territory they can become very difficult to remove. Whether you adore the cute little raccoons in the woods and you are seeking to remove raccoons from your garden, flower beds, orchards, or attic, knowing raccoons is the first step to appreciating or controlling them.

1. Raccoons are omnivorous, eating almost anything.

Raccoons tend to eat any food that is abundant, but they prefer sweet foods. Candy and marshmallows are useful as raccoon bait that will not attract most family pets. Raccoons will strip small fields of corn bare just as the corn is reaching its peak sweetness. Raccoons will eat songbirds, woodpeckers, ducks, and quail, and snatch the eggs of larger birds such as turkeys. They will devour frogs, shrews, mice, voles, moles, rats, and jackrabbits. They will eat almost any kind of fruit as it ripens. And they also enjoy food from the trash.

The reflective layer in the lens of the eye that makes raccoon eyes seem to glow red in the dark also magnifies images of nearby objects. Raccoon vision is binocular, giving them depth perception, and the animals have the ability to distinguish colors. Raccoons do not have good distance vision, however, so they will avoid open spaces, especially during the day when the reflection of light makes distant vision less reliable.

3. Bobcats, coyotes, and some species of owls, such as the great horned owl, are natural predators of raccoons.

Red and gray foxes also sometimes eat raccoons. In the Pacific northwest, raccoons are also eaten by wolves, and in some rural reaches of Georgia, young raccoons make up most of the diet of alligators. Raccoons that live in environments where there are no alligators, wolves, bobcats, coyotes, owls, or foxes have no natural enemies other than irate homeowners.

4. Invasions of raccoons into human habitat is mostly likely when either food supplies in the wild or low or food supplies near human residences are high.

Trees provide both shelter from both weather and predators for most species of raccoons. In the northern United States and Canada, raccoons often live in hollow spots in tree trunks that provide both a wind break and a small amount of additional warmth. Green belts between housing developments and woodlands near fields also offer good locations for raccoons. In the southern United States and in central America, raccoons favor marshlands where they can gather decaying plant material to make cool and comfortable dens that protect them from daytime heat.

The second half of the raccoon’s scientific name, lotor, literally means “washer.” Raccoons often wash their food, but not because of cleanliness. A raccoon will, after all, sometimes feed on dead animals that were caught in traps. A raccoon will wash worms or crayfish to get rid of dirt, but it washes other foods to have better skin-to-food contact in its paws. This allows it to inspect and remember the food, and makes it less likely the raccoon will drop the food it carries to its arboreal perch to eat in safety.

The washing ritual in which raccoons feel foods allow raccoons to learn about new foods through cultural inheritance. If two or more raccoons come on an abundant food supply, such as watermelons that fell off the truck, then the individual raccoons will know that they can eat whole watermelons they find in a farmer’s field later. Anything that appears in the garbage in pieces and is found by raccoons becomes a food that raccoons will seek whole. The “feel” of part of the food helps the raccoon recognize its edible parts.

Almost any adult raccoon is more powerful than almost any adult dog. Raccoons are known to charge and fight dogs that invade their territory. There is a widely repeated although unverified story of a man who weight 91 kilos (a little over 200 pounds) who kept from falling from a tree by hanging on to a raccoon’s tail. Family pets will not be able to fight raccoons and usually need protection from raccoons.

8. Raccoons mate at the same time every year.

Raccoons mate during the spring when days reach a certain length. Snow cover, drought, and food supply do not determine when mating will occur. Shortly before mating season, a male’s testes approximately triple in size. Females that are at least a year old ovulate and become receptive to sexual intercourse. The male impregnates the female with with a penis that contains an S-shaped bone that locks into the female until she pushes him off her back, usually after an hour or longer. (The penis bone is so prominent that early native Americans sometimes used it as a cleaning tool for pipes for smoking tobacco.) The female only ovulates after she has mated, and she may bear cubs 50 to 60 days later. If she spontaneously aborts her offspring or the embryos are absorbed back into her body due to food shortages, she may mate a second time in the same year.

Although raccoons may leave scat in your lawn or garden or on your porch, groups of raccoons usually defecate and urinate in a common latrine to avoid spreading their scent across their feeding territory. Attics, garages, and abandoned houses are favorite sites for raccoon latrines because they are protected from predators.

Dogs often drown when they pursue raccoons into the water. Even a young raccoon usually can swim 150 meters (480 feet) across a river or lake, and older raccoons have no difficulty swimming up to 1.5 kilometers (about a mile). The tiny, 2-kilo (4-1/2 pound) Torch Key raccoon swims between islands in the Florida keys.

11. Young raccoons and their mothers chirp, whistle, and purr.

Young raccoons communicate with their mothers through at least 13 different vocalizations that have precise meanings. As the cubs mature, they “talk” primarily to locate the mother, and as they mature, raccoons cease to communicate with other adults vocally. Raccoons of all ages are able to identify each other by sniffing their tracks.

12. Like dogs, raccoons can lower their body temperature by panting.

Raccoons have sweat glands, but they also cool off by panting. Panting draws air through the nostrils over the rugae, ridges in the top of the mouth. At the rugae there is a “rete mirable,” a miraculous net of small arteries and small veins that delivers moisture to the mouth. As the moisture in the mouth evaporates on contact with dry air coming through the nose, body temperature is lowered, especially in the head and neck.

13. Also like dogs, raccoons identify each other by sniffing their posteriors.

Raccoons have tiny scent glands surrounding the anus. The unique odors of these glands are identifiable to other raccoons that come within 5 cm (2 inches) to inhale the secretions.

Raccoon paws have four “fingers” and a “thumb.” They can grasp small object and even snatch insects flying by. Raccoons learn how to operate knobs, handles, latches, and zippers, and can recall how to open a latch even a year after they learn the motion. Their forepaws are much more sensitive than their back paws.

15. Raccoons have a special adaptation that allows them to run on short legs.

Raccoons walk with plantigrade motion, that is, they have to put their paws firmly on the ground as they move across it. To outrun wolves and foxes, however, the raccoon propels itself by putting its back paws in front of its forepaws as it gallops across the ground.

A raccoon may range over just 100 to 200 meters (1 or 2 city blocks) in an urban environment. A raccoon in rural Texas may range over 1000 hectares (2470 acres) finding food and water. A single corn field may be attacked by racoons living over a 400 square kilometer (100 square mile) area in rural locations where fields are separated by woodlands. Trap and release programs are of some value in urban settings but require considerable effort in rural settings.

17. Raccoons in Canada and Germany often carry parasitic roundworms that can be passed to people.

Up to 70% of raccoons in Germany carry roundworms. Canadian health officials have begun reporting roundworm infections in children who have come in contact with raccoon feces. There are medications that get rid of roundworms if the infection is detected in time, but untreated roundworm infections can cause profound brain damage. Small children and the elderly are at greatest risk.

Raccoons are described as greasy and gamey, but they can be eaten by humans. On the second voyage of Christopher Columbus to the New World, his sailors filled up on raccoon meat. Raccoon meat is a traditional food in some parts of the American South. Special care must be taken to avoid catching louse- or tick-borne infections while preparing the meat, and the meat must be thoroughly cooked to avoid transmitting roundworm infections.

19. Raccoons are associated with clandestine acts in the culture of parts of the American South.

“Goin’ coon huntin'” was a traditional cover for womanizing, checking on moonshine stills, or attending Ku Klux Klan meetings. As the South becomes more urban and progressive, the cultural importance of “coon huntin'” has diminished, although a Georgia church sponsored “Catching Coons for Christ” in the mid-1990’s.

20. Most raccoons die as the result of human activity.

In areas where raccoons have few natural predators, they most commonly die as the result of human intervention. In a study of identifiable raccoon deaths in Iowa, 78% of raccoons died as a result of being run over by automobiles and another 10% were captured for their fur. Homeowners kill only a very small percentage of all raccoons. Raccoon populations overall are growing rather than declining all over the world.