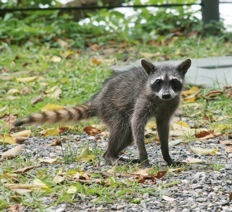 Toxocariasis is the increasingly common and potentially deadly disease that most of us have never heard of. About 6% of Americans have been exposed to the roundworms that cause this disease, with highest rates of infection in the southeastern United States and Puerto Rico. Up to 20% of Dutch people, up to 39% of Czechs, 40% of Brazilians, and 90% of Nepalese carry antibodies formed after exposure to the parasites. Two alarming cases were reported in Canada in early 2012.

A bouncing baby boy in Hamilton, Ontario, developed seizures at the age of five months. By the age of fourteen months he was legally blind and suffered profound neurological issues. His parents told doctors that their yard was infested with raccoons, but that he was not allowed to play outside. When public officials determined that raccoon feces found in the yard was infected with roundworm eggs, they concluded that the raccoon parasite had been brought into the house on the fur of the dog.

An elderly woman in Vancouver died of complications of a condition her doctors had diagnosed as Alzheimer’s disease. Autopsy found that her brain had several visible roundworm larvae.

In some parts of the world, notably in Germany, up to 70% of raccoons carry roundworms. In Canada, up to 62% of raccoons carry the parasites. Raccoons themselves usually are not made especially sick by the infection, but the worms release eggs into raccoon feces. The scat has to be mixed with soil and the eggs have to remain in the soil for at least two weeks before they become infectious to humans. By the time the roundworms are ready to infect a human host, evidence of defecation may not be visible. Then a pet rolls in the dirt, a young child eats dirt or puts fingers in the mouth after playing in the dirt, or an older child or adult works with the dirt and eats without washing hands first.

Roundworms usually do not destroy extensive amounts of human tissue. The greatest damage is done by the immune system’s reaction to the roundworms, destroying both the worms and surrounding tissues with inflammation. When only small numbers of roundworms establish themselves in the body, the only reaction may be an increased tendency for allergies and asthma. Wheezing is a common early sign of roundworm infection. Up to 70% of people in the United States who have chronic hives have been exposed to roundworms.

Rabies is viral infection of the central nervous system and brain that can be prevented but that almost never can be treated. Only two people have survived rabies, and they spent weeks undergoing heroic medical measures. When a person is exposed to the rabies virus, it travels up the peripheral nerves at a rate of 12 to 25 mm (1-2 to 1 inch) per day. When the virus reaches the spinal cord, it travels to the brain at a rate of 200 to 400 mm (8 to 16 inches) per day. It causes the release of toxins that produce behavioral changes and then cause death through extreme inflammation of the brain.

Raccoons also catch rabies. Unlike dogs, raccoons may be aggressive when they are not infected but friendly when they are infected. Raccoons continue to have good coordination during the early stages of rabies; a raccoon that is staggering around is more likely to be suffering distemper.

In the southeastern United States, especially in the states of Florida and Georgia, no animal is more likely to carry rabies than raccoons. The virus has been spreading northward and westward from Florida among raccoons for nearly 40 years. It has reached New England in the United States and Ontario in Canada, although it is not yet found in raccoons in Louisiana. (In the rest of the United States and Canada, rabies is most often transmitted by dogs, foxes, coyotes, and wolves. Texas and Mexico also have large populations of rabid bats and small numbers of rabid stray cats. The only rodent that lives long enough after catching rabies to transmit the infection to a human being is the groundhog.) Although there are only two confirmed human deaths from rabies transmitted by a raccoon bite, raccoons serve as a reservoir of the virus that can infect dogs.

If you are bitten by a raccoon you must seek medical attention. Rabies shots may be necessary. There is a series of globulin shots injected into the buttocks immediately. The globulin fights the virus directly. There there are five shots of vaccine given approximately every other day that stimulate the immune system to fight the virus. If you do not take the shots, you may die. Although the medication for the full course of treatment costs around $11,000 in the United States, if you do not have insurance coverage, you will be given the vaccine at no charge.

Another disease transmitted by raccoons is leptospirosis, a bacterial infection that initially causes symptoms similar to flu. In 90% of cases, there is recovery after initial symptoms. In about 10% of cases, there is a brief period of remission, and then the infection attacks the liver and the kidneys. The kidneys lose their ability to regulate acid-base balance, and infection in the liver may cause jaundice. About 20 days after exposure, the disease may cause inflammation of the heart and brain.

Raccoons release leptospirosis bacteria with their urine. As long as the bacterium is in contact with water, it remains viable. Dogs most commonly contract the disease by lapping up water from puddles into which raccoons have urinated. The dog then transmits the disease to the humans in the household. Signs a dog has been infected are lethargy, yellow eyes, and dark urine.

If your dog shows possible symptoms of leptospirosis and you then develop flu-like symptoms of your own, especially in the summer, you should see a doctor for diagnosis. Be sure to mention your dog’s symptoms as well as your own.

Raccoons may also carry the ticks that carry Lyme disease. They are most likely to acquire these ticks in areas that have high grass near trees. Although there are reports of Lyme disease in almost all of the cold-winter areas of North America and Europe, cases tend to occur in clusters. In the United States, 95% of cases occur in the states of Connecticut, Delaware, Maine, Maryland, Massachusetts, Minnesota, New Hampshire, New Jersey, New York, Pennsylvania, Rhode Island, and Wisconsin.

Tularemia is a plague-like disease that is most common in the “tules,” marshy areas with many reeds and cattails. Raccoons acquire it when they eat small rodents and jackrabbits. Humans can contract this bacterial disease by handling the carcasses of infected raccoons.

Tularemia transmitted by a raccoon is most likely to cause an infection that leaves the tip of the thumb or the tips of a finger swollen, black, and blue. Rubbing the eyes can spread the germ and cause painful swelling of the eye and conjunctivitis. In rare instances, the infection can cause much more serious consequences. The best way to avoid contracting tularemia is to be sure to wear gloves when handling dead raccoons, especially if you have cuts or abrasions on your hands.

Raccoons can transmit the mites that cause mange and ear problems to dogs and cats by direct physical contact.

Raccoons carry the lungworm Crenosoma globei, which can be contracted by malnourished people who eat raccoon meat. Either preparing the meat or eating rare raccoon meat can transmit the parasite.

Many foods we buy at the supermarket are contaminated with small numbers of E. coli and/or Salmonella bacteria. As long as the food is eaten right away or stored in the refrigerator, the small numbers of bacteria on the food are dissolved in the acid of our stomachs and we don’t get sick. Food we throw into the garbage, however, can grow enormous numbers of the microorganisms that cause food poisoning. Raccoons can eat spoiled food with minimal consequences because they have very short digestive tracts. Their feces, however, can carry enormous numbers of bacteria.

In rare instances, elderly people and people who have compromised immune systems can acquire infection with the bacterium Listeria monocytogenes from raccoons. The initial signs of infection are flu-like joint pain, lower back pain, nausea, vomiting, diarrhea, and fatigue. Women of reproductive age can pass the infection to their children, causing serious neurological problems in newborns. While it is possible to catch listerosis from raccoons, the disease is far more often acquired from infected food.

Raccoons transmit many dangerous diseases to humans and their pets. The only safe way to handle a raccoon, dead or alive, is with gloves that are thick enough to prevent bites and scratches. It is also essential handle raccoon traps with gloves.