You are here: Home / Squirrels / Does the Law Allow You to Kill Squirrels?
Tweet 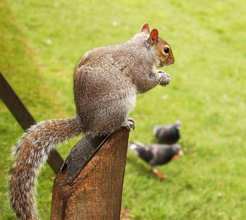 Squirrels are cute little furry creatures that most people love. Squirrels that devour flowerbeds, gnaw through the wiring harness of cars so they won’t start, burrow under water pipes, or wipe out a tomato or berry harvest overnight, however, may engender thoughts of squirrel-cide. In many locations, however, some species of squirrels are protected by law, and killing others may be impossible because of the danger to the squirrels that are protected.

Squirrels That Are Too Cute to Kill

The most serious ramifications of killing squirrels usually fall on people who intentionally or accidentally kill squirrels that are school or town mascots. The city of Olney, Illinois in the United States, for example, bills itself as the “White Squirrel Capital of the World.” Motorists who accidentally run over an an albino squirrel in Olney may be fined $500. Intentionally trapping or killing albino squirrels would cause icy relations with neighbors at best and arrest on criminal charges at worst.

Most states in the United States classify red and gray squirrels as game animals that can be killed for food consumption. Hunting game animals always requires a hunting license, which must be obtained before squirrels are killed. (In California, a permit is also required for trapping squirrels.)

However, many of the states that permit killing of game squirrels forbid the use of pellet guns to shoot squirrels. Many states require squirrel hunters to use shot guns to kill squirrels to be eaten or skinned for their fur. It is very difficult to remove all the shot from squirrel meat, leaving diners to chomp down on tiny bits of lead, and shot damages the pelts. It may also be unlawful to discharge a firearm within city limits.

Most provinces in Canada restrict hunting of native squirrels. British Columbia, however, permits “humane” hunting of non-native gray squirrels every day of the year on both private property and Crown land. (You must have permission to hunt squirrels on someone else’s private land and you may not be permitted to use firearms within town or city limits.) In New Brunswick, squirrel hunting season runs from October through January, killing of all species permitted. In Newfoundland the season extends into February, and in Labrador, the squirrel hunting season runs from October until March.

In the United Kingdom, the killing of squirrels as game animals is illegal, but the killing of invasive gray squirrels as pests is permitted. The Royal Society for the Prevention of Cruelty to Animals advises dispatching the squirrel by shooting or by a swift blow to the head. Citizens who kill even gray squirrels by drowning, suffocation, poisoning, bludgeoning, or electrocution may face arrest or fines. In the UK, pellet guns, shotguns, and rifles may be used to kill squirrels, but the user of the gun must be properly qualified and a shotgun or rifle must be registered and licensed. Pellet guns do not have to be registered, but they may not be discharged within 15 meters of a public thoroughfare and the pellets must not be shot on or over another property.

Killing Squirrels with Bows and Arrows

Some breeds of dogs, such as whippets, naturally hunt rodents. They may kill as many as 20 squirrels in a single day, usually not consuming the animal. Allowing a dog to kill squirrels is usually permitted, but training a dog to consume squirrels usually is not. In cities where squirrels are protected by city ordinance (especially cities that promote tourism by identifying their squirrel populations are a tourist sight), dog owners may be required to muzzle their dogs in public places and to keep dogs out of unfenced yards. Social pressure on owners of hunting dogs may be intense.

There are no jurisdictions in North America or the United Kingdom that permit poisoning of tree squirrels. There are no poisons that are registered for killing squirrels, that is, there are no poisons that can be lawfully used for this purpose. Even if poison were approved for squirrels, their extensive range, up to 10 hectares (25 acres), would require the use of enormous amounts of poison that would kill other wildlife and contaminate water supplies. When homeowners manage to kill attic squirrels with rat poison (unlawfully), the squirrel usually dies in a tight space where it was seeking to exit the house. Rotting corpses of squirrels in walls and crawl spaces can be difficult to remove without requiring major repair jobs and may cause a terrific stench for weeks or sometimes months.

The exception to the rules for killing squirrels with poison usually is made for ground squirrels, especially when they burrow under or around houses, gas and water lines, playground equipment, and sidewalks. Some states also permit poisoning ground squirrels that threaten orchards and nut groves. A license for the poison is required, and use of poison will not be permitted if it would put endangered or protected species of related animals at risk.

Electric fences do not kill squirrels or other small animals. They only give them an unpleasant and painful shock. “Rat zappers” are too small to trap squirrels that have matured enough to leave their nests. You might be able to rig up your own “squirrel zapper,” but you should not do this unless you are very knowledgeable of the use of electricity. It doesn’t do you any good to electrocute a squirrel and burn down your house.

Squirrels can be killed with various kinds of snap traps. Rat or mouse snap traps are not large enough to kill squirrels. They are more likely only to maim the squirrel. Larger spring-operated traps are available from several companies specifically for killing squirrels. The Victor-Oneida Company makes a “Conibear” trap that looks like a rat trap stood on its side. Whenever a squirrel passes through any part of the trap, it snaps shut over its neck—if the trap is positioned correctly. If the trap falls over, it will only capture the squirrel by its foot. The squirrel may gnaw off its leg to gain freedom, and the severed limb may attract mice and rats.

It is legal to kill squirrels with snap traps in most of the United States, with exceptions for Alaska, Hawaii, and Washington, D.C. The Conibear squirrel trap was invented in Canada, and in the province of Ontario it is actually illegal to use a catch and release trap for capturing and relocating animals, although it is legal to use the trap. In the UK, it is unlawful to use a trap that might capture a protected red squirrel—which makes using kill traps to control gray squirrels largely impossible.

Killing squirrels, however, really is not necessary. You can use check valves and one-way doors to keep them out of your attic once they go out to forage. You can use various kinds of odorous agents and ultrasonic repellents to keep squirrels out of your home and yard. You may be required to relocate squirrels (as in Washington, D.C.) or forbidden to relocate squirrels (as in Ontario), but every jurisdiction allows you to put steel over squirrel holes in your dwelling and to put mesh over tender plants.