Whether you experience squirrels as funny, furry woodland creatures or as the appropriate subject for a TV show to be entitled “When Squirrels Attack,” squirrels are uniquely complex rodents. Here are fifteen fun facts about squirrels.

Squirrels come in a variety of sizes. The African pygmy squirrel (Myosciurus pumilio) that lives in lowland forests in the Central African Republic, Cameroon, Equatorial Guinea, Republic of the Congo, and Gabon is smaller than many mice. It only grows to a length of 70 mm (a little under 3 inches) from nose to tail and weighs at most about 14 to 15 grams (around 1/2 of an ounce). Woodchucks and marmots, which are burrowing squirrels, can grow to the size of an average sized dog. Just before it goes into hibernation for the winter, the central Asian gray marmot (Marmota baibacina) that lives in Kazakhstan, Kyrgyzstan, Mongolia, southeastern Russia, and western China, may extend nearly a meter (over 3 feet) from nose to tail and weigh about 8 kilos (18 pounds).

2. Squirrels can have fur in almost any color or no color at all.

Most of the squirrels in North America and Europe are classified as “gray” or “red.” Gray squirrels may have fur that is black, gray, silvery, or reddish. From a distance, gray squirrels that have silvery fur appear to be albinos. Red squirrels in the British Isles are very definitely red, but the same species in Russia is usually gray and in the United States may be either gray or red. Many species of squirrels in Southeast Asia and the prairie states of the United States have stripes on their backs.

Squirrels anywhere in the world may carry an “agouti” gene that gives them salt-and-pepper black and white fur, some individual hairs pigmented, others having no pigment at all. The Kinabalu squirrel (Callosciurus baluensis) of Borneo has salt and pepper (mostly black) hair on its back and a bright orange underbelly, with a white “racing stripe” long either side of its body separating the two colors.

3. Some cities in the United States protect colonies of albino squirrels.

Albino or white squirrels resemble white rabbits, only with the ability to climb trees. A number of cities in the United States and Canada protect colonies of albino squirrels as hometown mascots. The world’s largest albino squirrel colony is in Olney, Illinois, where killing an albino squirrel is punished with a US $500 fine. There are annual albino squirrel festivals in Brevard, North Carolina; Exeter, Ontario; Kenton, Tennessee; and Marionville, Missouri. Each of the five cities claims to a “white squirrel capital.” There are colonies of white squirrels on college campuses at the University of North Texas, Oberlin College in Ohio, the Ohio State University, the University of Louisville (in Kentucky), Western Kentucky University, Youngstown University in Youngstown, Ohio, and at the Michigan Institute of Technology. The Michigan Institute of Technology also maintains a Facebook page on which students and alumni can post photographs and stories of their encounters with white squirrels.

The genes for white fur usually are linked to other genes that cause pink eyes and poor eyesight. There is a species of albino squirrel in Thailand (Calosciurus finlaysonii finlaysonii) that has white fur but black eyes, with good eyesight.

4. Some Central Asian ground squirrels live in harems with one dominant male and a group of sisters serving as his wives. 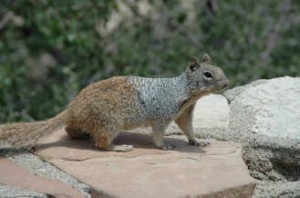 The yellow-bellied marmot lives in burrows guarded by a single, dominant male that usually maintains a colony of sisters to bear young. The marmots in the harem are amicable with each other, but hostile to other marmots. Only older females bear young. The presence of older females causes hormonal suppression of fertility in the young.

5. According to squirrel experts Katie Ferrell and Richard W. Thorington, Jr., South African ground squirrels maintain colonies of up to 20 all-male squirrels that spend most of their free time grooming each other.

The Cape ground squirrel (Xerus inauris) actually is not particularly common on the Cape of South Africa. It more frequently inhabits the drier reaches of western South Africa, Botswana, and Namibia. Males of this species have giant penises and testicles that extend over nearly one-quarter of their bodies. Female Cape ground squirrels remain with their mothers and grandmothers to raise young, while male ground squirrels leave the den to join “the guys” at the age of eight months. Males challenge each other to mate with females by leaping at each other, but they do not claw, bite, or scratch.

6. Most ground squirrels kiss when they see other.

Mouth-to-mouth and mouth-to-nose contact is common when ground squirrels in the same social unit meet. They may also click their tongues against their teeth, groom each other, or play by running around each other in circles.

Tree squirrels learn escape routes through trees. They remember the locations where they buried nuts by referring to landmarks to triangulate the nut’s position. They have to learn where to find nuts, which nuts are nutritious and which nuts will make them sick, how to open nuts with their teeth, how to build sturdy nests, and how to avoid predators and humans who want to trap them, that is, unless they decide they don’t mind getting trapped by a kindly human who feeds them every time they go inside.

Even more than burrowing squirrels, tree squirrels learn through observation and trial and error how to survive in a hostile world. And as the abundance of squirrels in the world confirms, squirrels are very good learners.

Dogs, as most people know, see the world in black and white (although some recent studies suggest they do have limited color vision). Squirrels see the world in living color, except for their inability to distinguish red and green. The inability to see the difference between green and red partially describes why squirrels usually eat fruit and tomatoes before they are ripe.

What squirrels lack in color perception they make up in their ability to see in bright sunlight. The lens of the eye in tree squirrels is pale yellow, while the lens of the eye in ground squirrels is dark yellow. The yellow pigment in the lens acts in the same way as sunglasses to block glare, giving squirrels excellent vision of their daytime surroundings. The inability of most temperate-zone squirrels to see well at night, however, makes them mostly diurnal creatures.

Squirrels have densely packed rods and cones all across their retinas. This enables them to remain motionless but clearly see a potential predator above, below, or to the side. In ground squirrels, however, there more rods than cones in the retina, so the squirrel has only very fuzzy vision in low light conditions.

Some species of squirrels have a muscle-powered membrane between their legs and their body that allows the to glide from a higher point to a lower point at a distance of up to 50 meters (160 feet, or half the length of an American football field). When the squirrel catches an updraft, it sometimes can glide even farther. The woolly flying squirrel (Eupetaurus cenereus) of Kashimir and northeastern grows to be up to a meter (39 inches) long, and may weigh as much as 5 kilograms (11 pounds). The pygmy flying squirrel (Petaurillus emiliae) of Borneo, by contrast, matures at a length of just 80 millimeters (a little over 3 inches) and weighs less than 30 grams (less than an ounce).

11. Squirrels communicate with a vocal language.

The clicks, clucks, and screams of squirrels have meanings that other squirrels understand—and with a few years of practice, you yourself probably could learn enough about the vocalizations to hold a conversation with squirrels in your neighborhood. Screams are usually the call of a pup squirrel to its mother. Clicks are usually warnings about approaching predators. If a human answers a squirrel click with a human “click,” made by snapping the tongue against the upper teeth, the squirrel will usually treat the clicking human as a very large and strange looking visiting squirrel also needing a warning about the predator. The exchange of squirrel clicks and human clicks can go on as long as half an hour.

Just don’t growl at a squirrel. A growl is typically a mating call.

A mother squirrel confined in an attic without food or water may eat some of her pups so she can sustain the rest. Squirrels of both sexes that are deprived of salt and calcium may nibble the bones of dead squirrels and other animals.

Tree squirrels hear pitches between 53 and 63,000 Hz. They hear some sounds at frequencies low enough for humans to hear, but they also hear high pitches that are also heard by dogs. Ground squirrels typically hear pitches between 16 and 26,000 Hz, about the same range as humans. The ultrasonic squirrel repeller is effective against tree squirrels, but usually don’t work for controlling ground squirrels. Visit here for full details on how to get rid of squirrels.

14. Squirrels flee most predators, but usually not snakes.

Snakes can wipe out entire nests of defenseless baby squirrels. To deal with the threat of snakes, squirrels usually take an aggressive stance, lunging at the snake, making warning sounds, and kicking dirt and sand at the snake. Squirrels may even bite smaller snakes.

Attacking snakes is not suicidal behavior in squirrels. Snakes depend on camouflage and stealth to trap their pray. The defensive actions of squirrels alert their neighbors so that at most one squirrel will be eaten. Some squirrels even kill the snakes that would attack their nests. A plastic camouflage snake placed in a highly visible location and remaining motionless, however, will cause squirrels to detour around it or stay back, away from the plastic snake.

The ground squirrels (which includes prairie dogs, groundhogs, and marmots) don’t climb trees because their bodies are not designed for climbing. Certain tree squirrels, however, especially red squirrels, sometimes live underground. They are most likely to occupy burrows during the winter, when predatory reptiles are not active.