You are here: Home / Moles / Fifteen Facts About Moles
Tweet 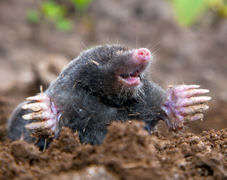 Frustrated homeowners often spend years battling moles for control of their lawns and gardens. They use mole traps and poisons and sometimes literally resort to standing watch over mole hills with firearms waiting for any sign of movement in the mound. Before you make your own mountains out of mole hills, get moles under control by paying attention to these fifteen essential facts about moles and how to get rid of moles.

1. Moles are found almost everywhere in the Northern Hemisphere except Ireland and in arctic regions where the ground freezes solid in the winter.

If you live almost anywhere other than in the arctic or in Ireland in Europe, Asia, and North America, you may have moles. They are found everywhere except in permafrost and in the most severe desert conditions.

Moles in the Northern Hemisphere are known as true moles. There are also “golden moles” in South Africa that are capable of “swimming” through sand that mostly live in desert areas, and there are blind marsupial moles in Australia that are more closely related to kangaroos. The ant-eating pink fairy armadillo or pichiciego of central Argentina bears some external resemblance to a mole but is not a true mole, and the tuco-tuco elsewhere in South America is actually a pocket gopher. The “moles” in the Southern Hemisphere usually do not infest lawns and gardens.

Male moles may travel above ground during early spring in search of mates, but most moles spend almost their entire lives underground. Moles have a unique form of hemoglobin that allows them to recycle oxygen. They are capable of living in tunnels where carbon dioxide accumulates to levels that would kill most mammals that live above-ground. A mole’s paw is a six-fingered “hand” with two thumbs that is perfectly adapted to digging dirt, the upper thumb covered with fur and extending from its wrist. Moles have poorly developed eyes and are often blind, but they have excellent hearing and extremely fast reflexes. The star-nosed mole can capture and eat its prey faster than the human eye can follow the action.

Moles won’t eat your plants and bulbs. Moles are carnivores. (This means you should be careful with your fingers should you ever pick up a mole, if you don’t want your finger to be a dying mole’s last meal.) A mole’s saliva contains a toxin that can paralyze but not kill earthworms. Sometimes the mole eats the earthworm right away, and sometimes the mole stores the earthworm in a specially constructed burrow for later consumption.

Researchers have found tunnels filled with over a thousand earthworms in them. Before a mole eats an earthworm, it will pull the worm between its paws to extrude the collected soil from the worm’s gut. Moles also sometimes eat small mice and rats that wander into their tunnels.

There are no infectious diseases that humans acquire directly from moles. Ticks that jump from moles to household pets and other wildlife and then to humans, however, sometimes transmit hantavirus or tick-born encephalitis. Moles can also be infested with kissing bugs that transmit Chagas disease. The viral infections are most common in temperate climates with cold winters. Chagas disease is most common in areas that do not see freezing weather during the winter (you can read about the symptoms at the The National Center for Biotechnology Information).

6. Moles do most of their damage by disturbing the soil.

Moles can become so numerous that the tailings of soil they remove from their burrows cover the ground and smother grass. They can disrupt lawn irrigation systems and bring stones to the surface of a lawn that can get caught in lawn mowers and weed eaters. They kill small plants by shifting the earth beneath them, and their tunnels expose the roots of trees and shrubs to attack by voles and weasels.

7. Moles are not entirely solitary creatures.

Moles will fight to the death to defend their territory, but they often do not live alone. A single square meter (about 10 square feet) of ground may be home to as many as a dozen moles during breeding season, in the early spring.

8. Moles are not nocturnal.

Moles are more active during quiet periods, when they do not hear people or animals moving around their burrows. Wildlife researchers have found that moles sleep in four-hour shifts throughout the day and night. They are most likely to be active in the early morning or just before sundown. Humans are most likely to notice evidence of mole activity in the early morning, but the mole is not primarily active at night.

A large mound of dirt near the opening of a mole’s burrow is only an indication that the soil is soft and easy to dig. In harder soil, moles make smaller openings more frequently, leaving smaller piles of dirt around the “door” to the burrow.

Moles have an innate sense that the interior of a human home is a high-risk area. They almost never travel long distances over open, flat surfaces. It is highly unlikely that a mole will find its way into your house except during a flood. In North America, floods are most likely to bring out the star-nosed mole, which has 22 pinkish “tentacles” around its nose that allow it identify and eat small prey in as little as 1/10 of a second. The star-nosed mole is a good swimmer that usually survives floods. It can even feed on small fish and mollusks to supplement its diet.

11. Moles build their tunnels where food is and noise isn’t.

Young moles begin to stake out their territory in mid-summer, about two months after they are born. Since the mole feeds on earthworms, it will build its burrow where it finds earthworm castings. Since the mole depends on its ability to hear an earthworm falling out of the roof its tunnel or wriggling up through the floor of its tunnel to catch its prey, it will prefer quieter locations. Noises made by heavy machinery almost always drive moles away—but most homeowners can’t go out with a jackhammer every morning to keep their grounds mole-free.

Moles adapt to a variety of weather conditions, but they prefer moderate temperatures. They prefer a soil pH of about 5.5, slightly acidic soil without too much peat or acidic compost. They prefer well-vegetated areas that protect them from predators as well as provide good habitat for worms and grubs.

13. In the southern half of the United States, lawns planted in Bermuda grass are likely to resist moles.

Moles are usually first recognized with criss-cross “superhighway” patterns appear on the lawn as tunnels severe the roots of grass. Because Bermuda grass puts out long stolons up to 2 meters (more than 6 feet) away from the individual shoots of grass across the surface of the ground, it is much more resistant to mole activity than other popular turf grasses.

14. Voles and moles are different creatures.

Voles are rodents, while moles are a different kind of mammal known as an insectivore. Voles often occupy tunnels made by moles, but they are an entirely different animal. Voles are also known as field mice or meadow mice. A vole is shorter and stouter than a house mouse. It has a stubbier tail, sharper teeth, and smaller eyes and ears than most mice. Unlike the mole, a vole is sighted, and also unlike the mole, it is an herbivore, feeding on the roots of shrubs and trees. Sometimes voles completely girdle the underground trunk of a plant, cutting off circulation from its roots and causing its slow death from the trunk up.

15. Everything about moles in the garden is not bad.

Moles actually can be beneficial in the garden when they are present in small numbers. Moles kill grubs that kill grass and young shrubs. For the mole, a white grub is usually just an appetizer to the main course of earthworms, but one study found that about 2/3 of moles eat at least some white grubs. In the course of its lifetime, a mole may consume as many as 200 grubs.

Moles also help with soil maintenance. Their digging aerates the soil, and carries humus deeper into the earth. They carry mineral-rich subsoil up to the surface, making it more available to plants. In extremely dry climates, their tunnels capture rainfall and impound it where it does not quickly evaporate. If you have moles that aren’t killing desirable plants or causing eyesores, you may decide to live and let live. Learn more about the different types of pest control products here. 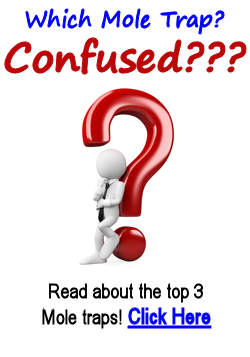