You are here: Home / Rats / Ten Facts about Rats Every Homeowner Needs to Know
Tweet

The secret to success in getting rid of rats is knowing your enemy. Here are 10 facts about rats that every homeowner needs to know.

1. Just three out of over 70 species of rats cause most homeowner problems.

All rats are omnivorous, but all rats have favorite foods. You can use this fact to your advantage in rat removal.

Black rats tend to be particularly specialized eaters. Identify the food they eat most and remove it, using it to bait traps. Don’t deprive them of other foods. Just use the preferred food to lure rats into traps.

Brown or Norway rats need grain in their diets. They typically eat grain by holding a seed in their paws and nibbling at the middle, letting the sides of the grain fall away when they have nibbled through. Since rats can’t efficiently carry grain to their nests, grain makes a good bait for brown rats.

Polynesian rats are nocturnal, except in late summer, when they tend to emerge just before dusk. Put out bait during the day to trap Polynesian rats in the early evening.

3. Rats are neophobic, wary of changes in their surroundings.

Trapping is usually more successful if traps are left out without having been sprung for several days. Put bait on traps to let rats become complacent about the presence of traps in their runs, and the spring the traps several days later for maximum catch.

4. A “tasting rat” typically tries a new food before it is consumed by the entire pack.

Rats don’t actually hold meetings and appoint one member of the pack to be a taster for all the rest. The smallest and least aggressive rats are blocked from food supplies by larger and more aggressive members of the pack. These most vulnerable rats are forced to feed in the more dangerous locations. When the “tasting rat” eats at a new source of supply and survives, other rats then seek to take over the new food supply as well. Don’t spring a trap until the food has been tasted.

5. Rats have keen sense of smell.

Rats have superior olfactory powers, and easily detect the scent of human sweat. Even invisible traces of sweat on your fingers can be detected on traps and bait. Handle traps with several thicknesses of newspaper or paper towel every time you hold them. Gloves don’t mask scent because they have to be held as they are put on.

6. Rats like to be able to feel a hard surface with their whiskers as they move from place to place.

Brown rats, in particular, like the safety of burrows. You will have more success with a trap you set against a wall or in a corner than with a trap you set in the middle of a large open space. Even better, cut out a cardboard tunnel you place over a trap set next to a wall. The tunnel should be no higher than the rat is tall and fit completely over the trap.

7. Baits are more effective when they are placed both on and under bait platforms.

Anything that lures a rat closer to springing a trap makes capture more likely. When using peanut butter as a bait, for instance, use a disposable plastic eating utensil to place the bait both under the bait platform and under it. If you are using a Havahart trap or a rat zapper, place some bait at the opening of the trap, where the rat will not be captured, to encourage larger rats (who wait on the experience of the “taster” rats before trying new food) to enter the trap.

Ultrasound devices for controlling rats mimic the high-pitched frequencies rats use to communicate with each other. A smaller, weaker rat who hears the ultrasound generator is less likely to enter the room because it fears encountering a larger rat defending its territory. A hungry rat, however, may go ahead and enter the room in hopes of feeding.

Ultrasound devices are also more effective against male rats than against female rats. Male rats emit a high-pitched mating call similar to the ultrasonic pitch. A female rat ready to bear another litter may actually be attracted to an ultrasound device. Both she and her offspring may remain in your home if you do not use other means of rat control.

This means that it is important to set out ultrasound rat deterrent devices in rooms where food is not stored. It’s also important not to use these devices for more than about a week at a time, because rats become habituated to them in less than two weeks and start to ignore the electronically generated high-frequency pitch. Use ultrasonic rat repellers as part of your overall plan of rodent control, not by themselves.

One of the most frustrating facts about rats is that rats like to leave their droppings and urine on freshly scrubbed floors in cabinets you have just cleaned out. The reason for this is that rats release tiny traces of chemicals known as pheromones when they are alarmed. These pheromones serve as a chemical memory of dangerous situations both for the rat that releases and for other rats that may come the same way. When you clean up rat droppings and urine, you also remove the pheromones the rat has laid down to warn it to stay away, and you reopen your home to new rat invasion. If you can keep your family away from the mess, it’s better to get rid of rats and plug entryways for fresh rat invasions into your home before you do necessary sanitation.

10. Rat zappers are an especially humane way to kill rats.

There are people would argue that there is no humane way to kill rats (although these people don’t usually live with rats in their homes). For them, trap and release is the only option.

If you would prefer to kill rats with a quick and painless dispatch, however, your best option is a rat zapper such as the Agri Zap RZU001 Rat Zapper Ultra. Scientists have found that the rat zapper kills the rat by disrupting the hippocampus, the fear and pain centers of the rat’s brain. The rat probably feels no pain and no fear during its termination by the device.

More information visit how to get rid of rats.

Want to take a look at the kind of meticulous scientific research that is required to build a better rat trap. Visit Male Rats Respond to Their Own Alarm Pheromone for an example. 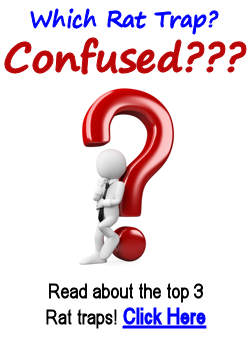