Gopher control always means gopher killing. It is simply not possible to trap and release a gopher elsewhere, because the fast metabolism of the animal would cause it to expire of hunger and thirst before it could be released from the trap. The best way to dispatch a gopher is with a sharp, mechanical stabbing action or with an electric shock, sparing it any suffering and removing it from your yard.

We prefer the Victor 0625 Black box Gopher Trap for killing gophers. It kills the gopher very quickly, and there is a minimum of blood and gore to clean up, or to attract predators that might take the dead gopher and your trap with them if it is not staked down. The Victor Black box trap takes a little more work to set, but it is far easier to reuse after the kill.

For a little lower cost per unit but about the same cost per gopher, we also recommend the older-style mechanical traps such as Sweeney’s Gopher Trap, which impales the gopher to ensure quick death, and the Victor 0611 Easy Set Gopher Trap Twin-Pack, which kills the gopher with a quick pincer action. These mechanical traps cost less up front, but they don’t last as long and require more maintenance. Still, if you live in an especially damp climate, you may prefer mechanical gopher traps that work even during heavy rains.

There is no reason not to use all three devices, just in case the gophers on your property have become “trap wise” to one but not the others. Also be sure to buy heavy gloves to wear when you handle the traps to mask your scent. The consumer product reviews we have posted with these products give the information you need to use each one even more effectively than you can following the manufacturer’s printed instructions.

Why We Recommend Amazon.com for Gopher Traps

Gopher traps are something of a specialty item. Even the largest home supply centres often don’t carry them. We recommend that you shop Amazon.com for the best selection and the lowest price, with free shipping for orders over $25.

You can quickly go to any part of this review by clicking on the links below.

By far the best gopher trap I’ve ever tried 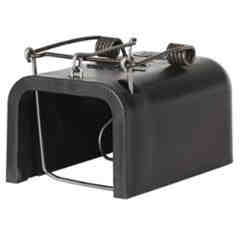 The Victor 0625 Black Box Gopher Trap is by far the most effective way of trapping gophers fast, that I have ever tried, but the instructions that come with it aren’t the greatest. If you don’t know these essentials, then it is more or less a matter of luck. If you do, you will be well on your way to catching them fast.

This is one of the best pincer or pincher traps. It costs a little more, but it’s a lot easier and safer to use, and it works. Follow this link to read customer reviews and get the best price for the Black Box Trap on Amazon.

Sweeney’s Gopher Traps don’t just kill gophers. They run them through so there’s no chance of escape. It is a quick death, so as killing animals goes, it is a humane death, but I’ve found that getting good results requires more than one trap.

Just as the manufacturer’s diagram shows, it’s important to set out at least three traps per tunnel, one trap on either side of a dig about a foot away from the tunnel opening (in the tunnel, of course), so there is a trap to capture the gopher no matter which way it is going, and a trap in the tunnel as goes up to the surface.

It may seem like obvious advice, but it wasn’t obvious to me: When you are setting the trap in the entrance to the tunnel, you put it on the lower side of the entrance. Don’t try to stake it upside down.

How many gophers can you trap with the Sweeney Gopher Trap? Using 3 traps per tunnel and dealing with 8 tunnels, I have caught over 100 gophers in the last month. Obviously, it’s better to tackle the problem before you get this many of the little pests in your yard, but this gopher trap doesn’t require any poisons, doesn’t endanger kids or pets, and is a heck of a lot cheaper than some of the alternatives. I just wish I had started my gopher control project a lot sooner.

One of the best places to buy Sweeney’s Gopher traps is on Amazon. You can read customer reviews and quickly compare prices.

A great buy for the money but needs gentle treatment

If you are looking to get rid of a lot of gophers without rototilling to get rid of grass roots, putting out poisons that can kill pets or wildlife, electric gopher zappers, electric fences, sonic devices that can drive your dog crazy, flooding, flame throwers, car exhaust, or nuclear weapons, the Victor 0611 is a good way to go. I give this product five stars, but that’s because I have learned how to use it efficiently. It takes a little practice to use this trap right, but once you do, the low cost and ease of use make it a real winner.

The most important thing to realize about the Victor 0611 is that easy to set means easy to break. It’s important not to apply too much pressure when you are bending the wires that engage the trigger. Also, after half a dozen uses or so the pinchers begin to come loose, so you’ll probably need to replace the trap. And if you don’t stake the trap, the gopher’s dying act may be to carry the trap farther into the tunnel out of your reach, or at least requiring you to do a lot of digging to retrieve the trap.

No matter. At this price, it’s OK if the trap wears out after it’s caught 10 gophers. The only other thing I can think of is to be sure to replace the sod over the tunnel where you lay the trap. If you give the gophers a skylight they won’t trip the trap.

Check out other reviews, read more details about the trap and buy the Victor easy set trap on Amazon.